How Did We Get Here Politically? 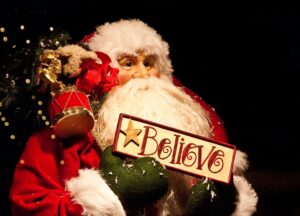 Retelling the Story of our Democracy

For Christmas, I wore a comfortable, velvety soft sweater my husband gave me that said: BELIEVE. Believe in what? Well, Santa Claus of course. But in reality, around the holidays I’m just saying BELIEVE in some sort of magic; some sort of pixie dust. Look at the stars and drink in the majesty. See the reflections of colorful Christmas lights on snow-laced tree limbs. Believe in laughter, love and community. Unfortunately, believing in a political ideology is a different kind of pixie dust.

We’re seeing in our country today something that has been a fascination of mine for many years—the power of belief. Like a recipe, belief takes the values of individual beings, things like protection, fairness, compassion, accountability or frugality and turns them into belief frameworks—funnel cakes in the brain made of neurons. Values are like ingredients you already had on hand. Then you add a binder like eggs and butter. The eggs and butter could be a video, an article, or a commentator who takes what you value and spins it into the funnel cake framework—once baked, a belief is born.

Let’s look at the value of protection. We all want it and need it, but we envision different recipes for obtaining it. We’re not all using the same eggs and butter to put it politely. Some of us support the current and more militant methods of policing and some support alternatives like community patrolling. In politics, the recipes are called policy. Add a catalyst like racially motivated violence to the policing value of protection, and we’ll have both sides baking different solutions. And baking rigidity into their existing frameworks. We might become more orthodox and fundamentalist. We might feel wronged, unheard and self-righteous. We begin to declare that people who don’t believe in our policy recipes are wrong, stupid and evil. They’re bad. Every one of them.

Then we see a percentage of people become radicalized. They no longer have any flexibility or allowance for alternatives and are ready to eliminate the wrong, stupid and evil people. It’s easier to harm humans when we decide they are less than human.

This is the starting line we’ve inherited in 2021. It’s going to take more than a vaccine to inoculate us against the fear and worry we’ve created in our society. Each of us must do our part to unwind the tyranny of radicalization and retell the story of our democracy—a story in which we all see ourselves.

This work begins with two admonishments: Don’t disconnect. Don’t retaliate. The only way to communicate and connect with those on the “other” side is to use the bridge of values—those values we share, but somehow have become lost in our disagreements on how to execute them. For example, some people are questioning the fairness of the 2020 presidential election. One way to keep the channels of communication open is to say: It sounds like we both care about fairness in electing representatives. Period. You have to stop there. Because the moment you tread into the waters of, “It seems like you believe it’s only a fair election if your side wins”—you lose the engagement of the other person. Instead, you might say: What would a fair election look like to you? What would have to change in order to deem an election fair? After they share, maybe they would be willing to allow you permission to share what you think makes an election fair. Be willing to drop the discussion and walk away from it if you value relationships over politics.

Regardless of your political persuasion, resist the temptation to punish the other side. Here’s some encouragement: “Daryl Davis has played the blues for over 30 years, including with the likes of Chuck Berry and Jerry Lee Lewis. He’s also spent 30 years talking to Klansmen, over 200 of whom have quit the KKK as a result of their conversations, handing over their robes to Davis—who is black. “When two enemies are talking, they’re not fighting,” Davis told NPR in 2017. “I didn’t convert anybody,” he explained. “They saw the light and converted themselves.””(link to quote)

Now that’s something we can believe in.

Things you can do:

Take a deep breath. Release worry. Know that we’ve witnessed our weaknesses as a nation and now we can do better.

Take time to see the beauty of nature.

Make time to feel heard. Tell someone what you’re going through.

Do something kind for someone. Send a nice text.

A counseling session for political angst within yourself or a political conflict with another person. There are several options on my website: https://www.julieethan.com/political-conflict-consulting/

Share this podcast (link) with those who are having relationship difficulties with a political other. It’s the number one downloaded podcast in this series.

Place relationships over politics and keep talking to the “other” about shared values. You don’t convert people by doing this—they convert themselves.

Share my book (link) with someone who needs some hope regarding the political divide told in an easy memoir format.

Yours on the journey,